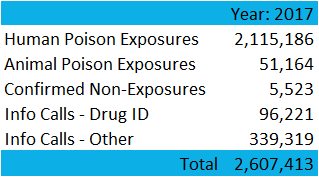 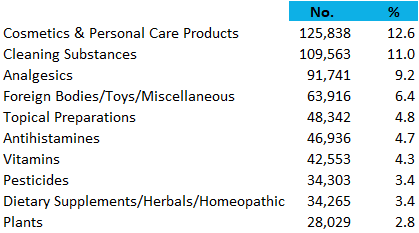 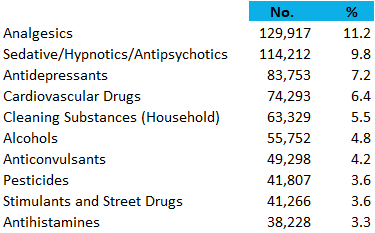 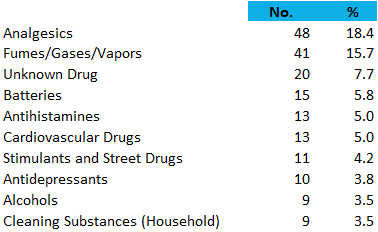 The substance categories with the largest number of deaths across all ages (and including intentional exposures) include sedatives and sleeping medications, opioids, stimulants and street drugs, and alcohols (NPDS, 2017). 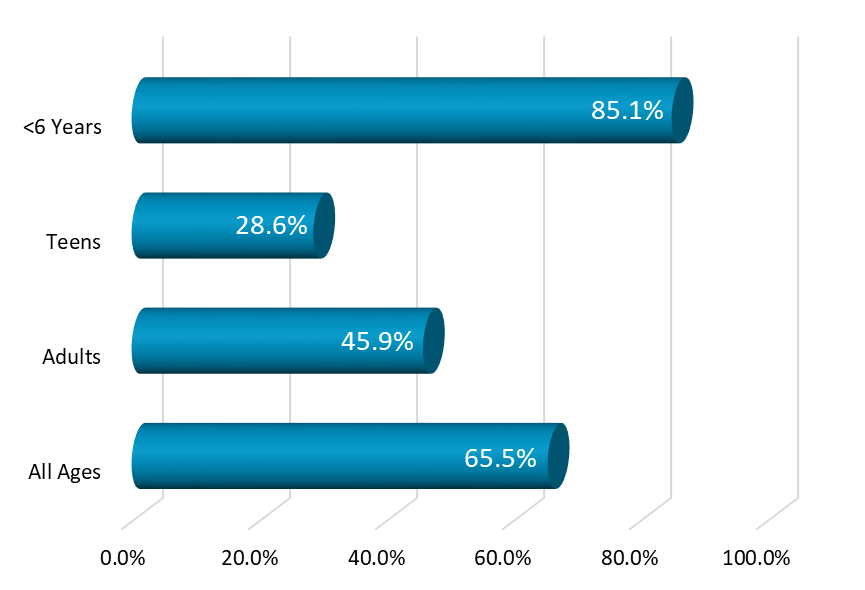 U.S. poison centers collect data in real time and upload those data every 9.5 minutes (median time to upload). Real-time data are used to find hazardous products quickly, follow substance abuse trends, and detect chem/bioterrorism incidents. Under a grant from the CDC, the American Association of Poison Control Centers and its member poison centers conduct automated, continuous surveillance of poison exposure cases. Alerts are sent when there are an unexpectedly large number of cases in an hour, when there’s an unexpectedly high frequency of a specific symptom, or when there are cases with combinations of clinical effects suggestive of specific poisonings that might require a rapid public health response. Toxicologists promptly investigate these alerts and inform public health officials if outliers are suspicious for events or products of concern.

According to the CDC, unintentional poisoning is the leading cause of injury death for all age groups.2 It has surpassed motor vehicle traffic fatalities as the leading cause of injury death in the U.S. since 2008.3 Based on provisional counts, 64,070 cases of death due to drug overdose were recorded in the U.S. in 2016.4 The majority of those cases, approximately 66%, involved an opioid.5 This figure, which includes both prescription opioid and heroin use, is five times higher than the number of opioid overdose deaths reported in 1999.5 The continuous rise in prescribing, use, and abuse of opioid drugs and the subsequent increase in opioid related deaths has come to be known as the opioid epidemic.

Total US Drug Deaths: Provisional counts for 2016 are based on data available for analysis as of 8/2017.
Counts through 2015 are based on final annual data.4 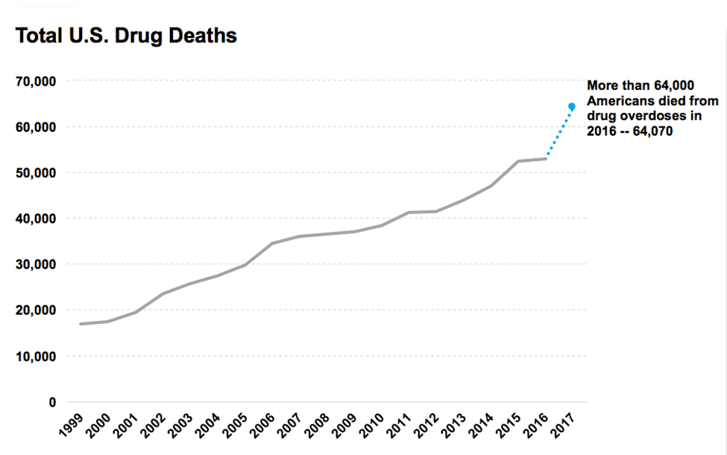 The opioid epidemic was initially fueled by the use of prescription opioids like methadone, oxycodone, and hydrocodone.  Prescribing patterns for opioid medications followed an upward trend from 2006 to 2012.6 Increased awareness, education, and discussion surrounding opioid use has helped to reign in the prescribing habits of many providers and from 2012-2016, opioid prescription rates declined by 4.9% annually.6

In 2008 it was also reported that the number of deaths involving prescription opioids surpassed the combined number of deaths from both heroin and cocaine use.6 In subsequent years, the number of deaths due to drug overdose, including the number of cases involving opioids, continued to rise. However, by 2015, use of heroin, cocaine, methamphetamines, and synthetic opioids like fentanyl were gaining in popularity. The sharpest rise in drug related fatalities was seen in 2016 and was associated with use of fentanyl and fentanyl analogs with over 20,000 deaths occurring that year.4


The substantial increase in fentanyl deaths has been linked to illicitly manufactured fentanyl that is used to adulterate other drugs of abuse or sold to unsuspecting users under the guise of another drug name.7 The potency of these synthetic opioids can range from approximately 3-10,000 times the strength of morphine by weight and the adulteration of heroin being sold in the U.S. with synthetic opioids has led to alarming medical consequences like naloxone resistance.8

Summary of National Poison Statistics, Reports to US Poison Centers