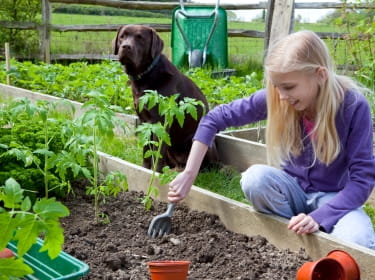 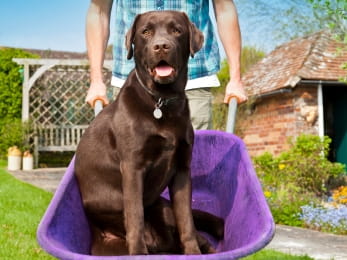 Chocolate contains theobromine and caffeine. The same substances are found in cocoa bean mulch. Dogs that swallow too much can have vomiting, diarrhea, a very fast heart rate, tremors, and seizures. Death is uncommon but has happened.

How much cocoa bean mulch is too much? It's hard to know. It depends on how much theobromine is in the mulch, and there's no way for a pet owner or gardener to tell. The dog's weight matters, too; the smaller the dog, the greater the danger. Also, the more mulch a dog eats, the greater the risk.

It's best if dogs are kept away from ALL sources of chocolate, including mulch made from the discarded cocoa bean shells. Consult your veterinarian: if a dog does eat cocoa bean mulch, giving hydrogen peroxide to cause vomiting might be the first treatment. If a lot of mulch was eaten, or if the dog is very small, the vet might want to give activated charcoal. Of course, any dog with symptoms needs to go to the vet right away.

There are a lot of mulch choices. If you have pets, you may want to leave the cocoa mulch behind in the garden center and choose an alternate. If you have questions about cocoa bean mulch, theobromine, caffeine, or chocolate you can call the poison specialists any time. The 24-hour number is 1-800-222-1222.