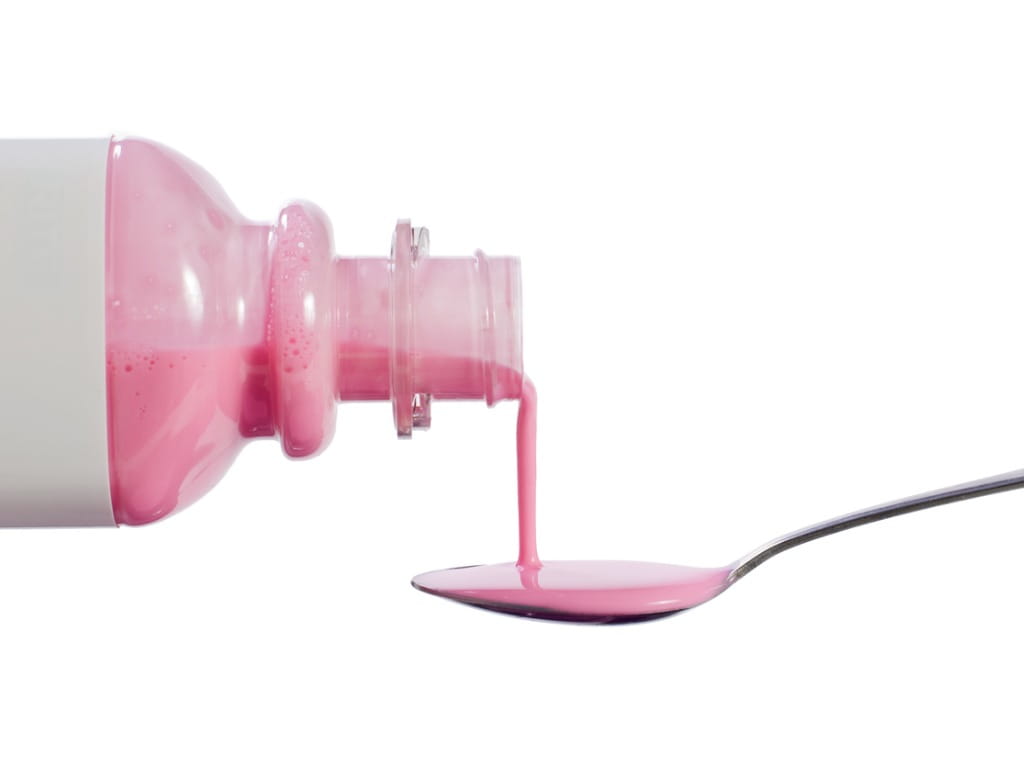 Pepto Bismol contains bismuth subsalicylate and is used for stomach upset and diarrhea. Bismuth can temporarily cause black tongue and feces. Salicylate toxicity can occur after overdose. Avoid Pepto Bismol if you take aspirin regularly. It is not advisable during pregnancy and breastfeeding. Children under 12 years of age should not take salicylate products due to an increased risk for Reye’s Syndrome. 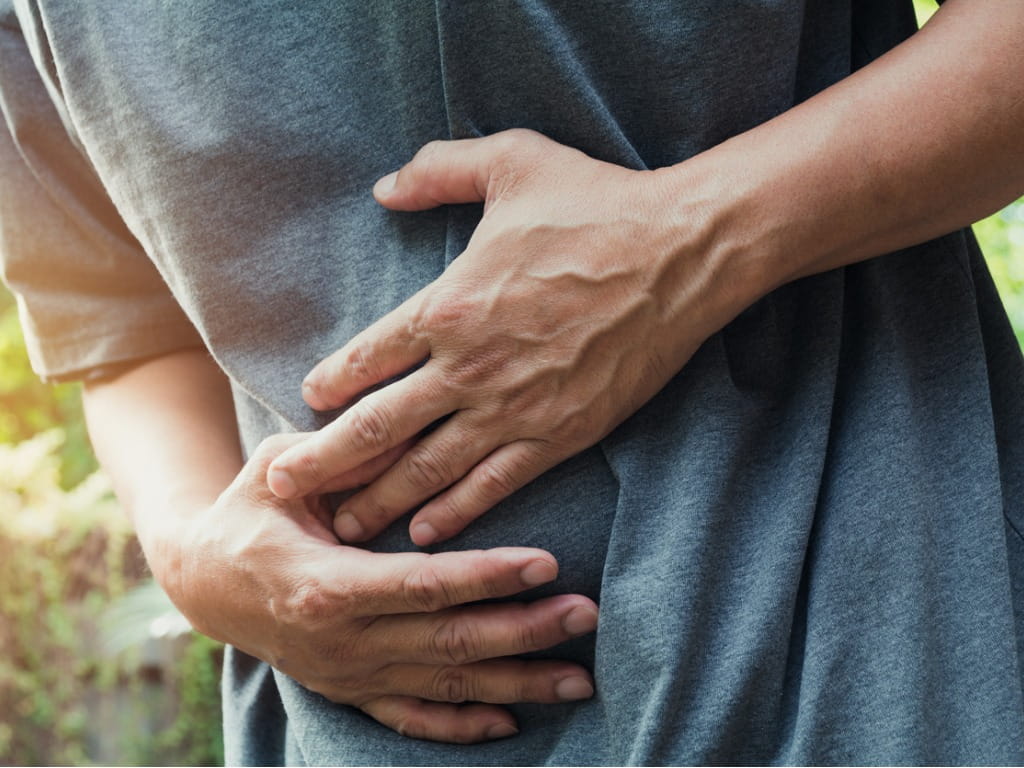 The active ingredient in Pepto Bismol® is bismuth subsalicylate. This compound plus a little red dye gives Pepto Bismol its pink color. (According to a Procter & Gamble historian, the color was originally chosen to appeal to children and reduce their fears.) Pepto Bismol original liquid contains 262 mg per 15 mL. Caplets and chewable tablets each contain 262 mg. A “dose” is usually 30 mL of Pepto liquid (524 mg) or 2 tablets for adults and children 12 years of age and older. A dose of 30 mL is the same as 2 measuring tablespoonfuls or 1 fluid ounce. Be sure to read the label, because some Pepto Bismol products have higher amounts of the active ingredient. Pepto Bismol Ultra is twice as concentrated, and Pepto Diarrhea is three times as concentrated as the original Pepto Bismol liquid. Look for “2X” and “3X” on these products, and follow the dosing information on the labels carefully to avoid errors.

What does Pepto Bismol do?

Pepto Bismol is an OTC medicine that is approved by the FDA to treat diarrhea, heartburn, indigestion, nausea, and stomach upset. Outside its FDA-approved uses, Pepto Bismol is sometimes taken “off-label” to treat peptic ulcers caused by Helicobacter pylori infection. A combination of bismuth subsalicylate, two antibiotics, and a proton pump inhibitor (such as Nexium®) is around 90% effective at eliminating H. pylori in the stomach. Pepto Bismol has also been used off-label to prevent and treat travelers’ diarrhea.

Once in the stomach, bismuth subsalicylate breaks down into salicylic acid and bismuth. Salicylic acid is almost completely absorbed into the bloodstream, while bismuth remains in the stomach. Salicylic acid inhibits the formation of chemicals called prostaglandins, which are responsible for intestinal inflammation, excess secretions, hypermotility, and diarrhea. Bismuth exerts antimicrobial activity by preventing bacteria from attaching to the stomach lining and also by inactivating some bacterial toxins.

What are Pepto Bismol’s side effects?

Adverse effects are uncommon with recommended doses, but mild side effects can occur such as nausea, vomiting, and constipation. When the bismuth in Pepto Bismol mixes with sulfur in saliva and digestive fluids, a black substance (bismuth sulfide) is formed that can darken the tongue and feces temporarily. This is harmless and will go away when you stop taking the medication.

If someone is allergic to salicylates (like aspirin) or already takes another salicylate medication, they should not use Pepto Bismol or any other product containing bismuth subsalicylate.

Should I take Pepto Bismol for food poisoning?

Diarrhea that occurs with food poisoning might improve with Pepto Bismol. As long as the diarrhea is not bloody and you don’t have a fever, Pepto Bismol is likely a safe initial treatment option. Follow the label dosing instructions carefully, and do not give the medication to children. If you have bloody diarrhea or a fever, these can be signs of a bacterial infection or parasites, which require medical attention.

Can I take Pepto Bismol while pregnant?

Salicylates such as bismuth subsalicylate should be avoided during pregnancy. After taking Pepto Bismol, a mother’s bloodstream contains about as much salicylate as if she had taken a dose of regular aspirin. Salicylate cross the placenta, so the baby can be exposed. The potential exists for low birth weight, jaundice, bleeding, and birth defects.

Can I take Pepto Bismol while breastfeeding?

It is recommended that nursing mothers avoid taking bismuth subsalicylate and use an alternative treatment for upset stomach and diarrhea. After taking Pepto Bismol, a mother’s bloodstream contains about as much salicylate as if she had taken a dose of regular aspirin. Salicylates enter breast milk. Adverse effects might occur due to absorption of salicylate by the nursing infant. A number of alternative OTC medications exist for diarrhea or upset stomach, such as loperamide (Imodium®) and antacids.

Overdose is possible, and toxic effects are most often due to the salicylate content. People who already take aspirin or other salicylates, the elderly, and people with kidney disease might be at higher risk for adverse effects. Bismuth is not absorbed from the GI tract, so bismuth toxicity is unlikely.

The symptoms of salicylate toxicity include vomiting, abdominal pain, fever, confusion, excessive drowsiness, rapid breathing, and ringing in the ears (tinnitus). If an adult takes a large dose of Pepto Bismol all at once (more than the contents of a full bottle of tablets or liquid) or uses the maximum dose for a prolonged period of time, these symptoms might signal the need for medical attention. A child who accidentally gets too much, or someone who takes Pepto Bismol to harm themself, will probably need to go to an ER. A call to Poison Control will help decide whether someone got too much Pepto, and what to do next.

To avoid toxic effects from bismuth subsalicylate, pay close attention to the dosing instructions on product labels. The maximum dosage is 8 doses per day of regular strength Pepto Bismol (4200 mg daily) for no more than 2 days. Observing these precautions should help you stay well within the safe range and avoid toxicity.

What else should I know about Pepto Bismol?

For children under the age of 12 years, always consult a physician about whether to give Pepto Bismol. There is a serious illness called Reye’s Syndrome that has been associated with the use of aspirin-related products in children who have or are recovering from an illness causing a fever such as the flu or chickenpox. Pepto Bismol should be avoided in these children to prevent risking this rare condition. A different product called Pepto Kids does not contain bismuth subsalicylate and is marketed for use in children—it contains the active ingredient calcium carbonate, similar to many OTC antacids. Be sure to read all Pepto® labels carefully.

If someone takes too much or experiences worrisome side effects from taking Pepto Bismol, get an immediate, personalized recommendation online at www.poison.org or call Poison Control at 1-800-222-1222. Both options are free, confidential, and available 24 hours a day.

PEPTO-BISMOL® IS A REGISTERED TRADEMARK OF PROCTER & GAMBLE, CINCINNATI, OH 45202.

A 79-year-old man went to an ER with increasing confusion, hearing difficulty, and uncoordinated gait (ataxia) that had lasted for a week. While other possible causes were being investigated, it was discovered that he had been drinking 1 or 2 bottles of Pepto Bismol daily for the previous 6 months to treat acid reflux (GERD). A high level of salicylate was measured in his blood. Pepto Bismol was discontinued and he was treated in the hospital with IV fluids to increase salicylate elimination through his kidneys. All of his symptoms resolved over several days in the hospital (from Halani & Wu, 2020).
Share this:
Facebook
Twitter
Reddit
LinkedIn
Copy shareable link

A 79-year-old man went to an ER with increasing confusion, hearing difficulty, and uncoordinated gait (ataxia) that had lasted for a week. While other possible causes were being investigated, it was discovered that he had been drinking 1 or 2 bottles of Pepto Bismol daily for the previous 6 months to treat acid reflux (GERD). A high level of salicylate was measured in his blood. Pepto Bismol was discontinued and he was treated in the hospital with IV fluids to increase salicylate elimination through his kidneys. All of his symptoms resolved over several days in the hospital (from Halani & Wu, 2020).